State of the Borough (Development)

VIEW OUR INTERACTIVE STATE OF THE BOROUGH REPORT

The State of the Borough paints a picture of Wirral using a range of statistics. Data is organised into themes, which can be explored via the navigation panel in the above link in an interactive way. View our summary report below. 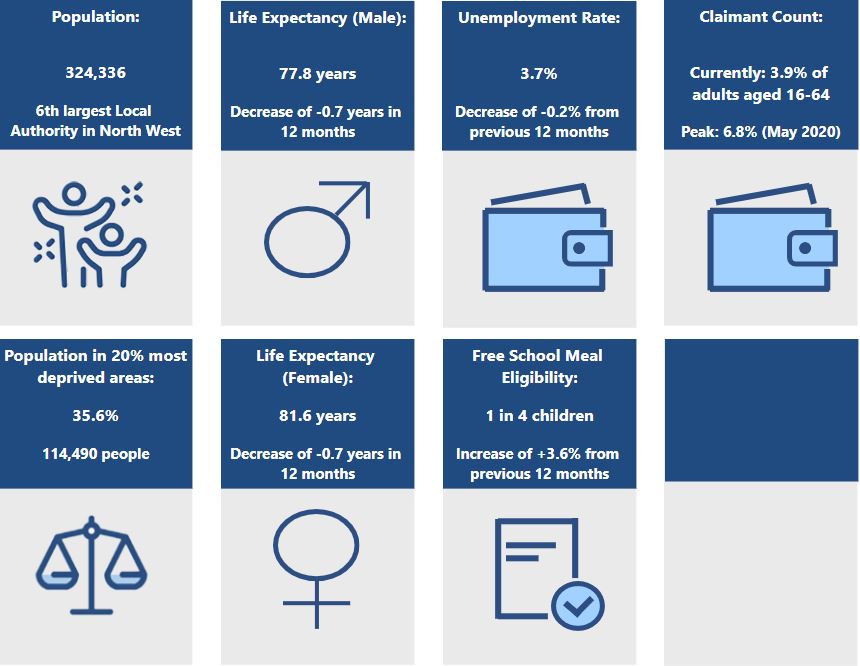 *Extra icon to be added

For more information please get in touch: wirralintelligenceservice@wirral.gov.uk

The local employment rate increased in Wirral compared to the previous year (70.7% in December 2021 compared to 70.4% in December 2020). Employment levels, however, have still not returned to pre-COVID-19 pandemic levels. In June 2019, for example, employment rates were 76.9%. Of those currently in employment, 62% are working full time (30+ hours a week), with 38% working part time (less than 30 hours a week). Modelled unemployment figures for December 2021 show that the proportion of people unemployed is 3.7% of the working age population. Claimant counts of residents of working age have slowly decreased since the beginning of the COVID-19 pandemic, with rates as of May 2022 roughly reflecting the modelled unemployment figure at 3.9%. This compares to a high of 6.8% in May 2020. Claimant counts vary significantly by constituency. In Birkenhead constituency, the proportion of residents of working age claiming benefits is 5.9% compared to 1.9% in Wirral South. Whilst 17,291 people commute in to Wirral for work (with Cheshire West and Chester being the most popular source), 44,332 commute out of the borough for work (Liverpool being the most popular destination).

Adults are more likely to be overweight or obese in Wirral when compared to the England average (71.8% compared to 63.5% in 2020/21), with this trend continuing to increase locally. Activity levels across the borough have decreased in recent years, with only 59.6% of residents reporting that they do at least 150 minutes of exercise a week (the recommendation for adults) in 2020/21. This includes walking, cycling, dance, fitness and other sporting activities. Over a quarter (27.6%) of all residents are inactive - i.e. do fewer than 30 minutes of exercise a week. Pregnant women smoking at the time of delivery, continues to decrease, having fallen from 14.6% to 12.1% in 10 years. This is still higher than the North West and England average (11.0% and 9.6% respectively).

Educational attainment (using average Attainment 8 scores at GCSE level) in Wirral shows that children eligible for free school meals (FSM) perform worse (38.5) than those not eligible (55.6), although the gap has narrowed in recent years. The same pattern is also apparent for children with Special Education Needs (SEN), with non-SEN pupils (55.5) outperforming pupils with SEN support (40.5) in Wirral on average Attainment 8 scores.

Immunisations for children aged between 2 and 5 years old were higher than the North West and England average for all vaccinations: DTaP (diptheria, tetanus and pertussis), IPV (innactivated polio vaccine), Hib (haemophilus influenza B) - otherwise known as the 6-in-1 vaccine, Meningitis C, Hib booster, PCV (pneumococcal vaccine) and MMR (measles, mumps and rubella) at 2 and 5 years old. However, in recent years there has been a trend of decreasing uptake both locally and nationally. First and second doses of HPV (human papillomavirus) vaccinations in females aged 12 to 13, and 13 to 14, were significantly affected during the COVID-19 pandemic, but are now beginning to recover to pre-pandemic levels, with first dose now above the North West and England average at 89.0% coverage.

In 2020/21 both measures of child poverty (absolute and relative low income) have shown a decrease in Wirral compared to the previous year. There are large inequalities in child poverty by ward, however, with over 1 in 5 (22.2%) children in Birkenhead and Tranmere living in absolute low income in 2020/21, compared to only 1 in 20 children (4.3%) in Clatterbridge. The Income Deprivation Affecting Children Index (IDACI, 2019) showed that 36.0% of children live in the 20% most deprived areas in England, primarily on the East side of the borough in Birkenhead and Wallasey constituency.

A PDF version of this summary is also available